Looking for a singer for a funeral in Hampshire? Our professional soloists can bring the celebration and solace of beautiful music to any funeral service, whether religious or civil, church or crematorium.

We can sing solos at ket points in the service, or just lead everyone in the hymns if case nobody feels much like singing themselves.

Our professional funeral singers offer a wide range of funeral music, from traditional songs to modern anthems, sacred songs and hymns. Your funeral singer will usually perform one or two solos during a funeral service, and also lead the hymn singing. As experienced funeral singers in Hampshire, our most popular funeral songs and funeral music include:
Hear us sing some of these popular funeral hymns and songs on our Hear Us page
​
At Hampshire Funeral Singers, our lady funeral soloists, soprano Toni and mezzosoprano Kirsty, are both professional opera singers, and can perform either with your organist or with our specially recorded funeral music accompaniments.

Hampshire Funerals Singers are part of Singers for Funerals based in Farnborough, so we can also offer a funeral singer for services in the south of England and western London, including Surrey, Berkshire, West Sussex, south Wiltshire, Middlesex, south Oxfordshire and south Buckinghamshire. 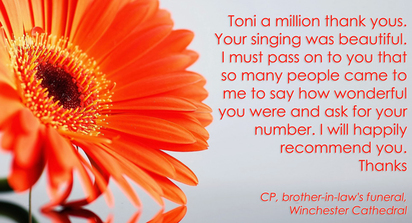 "I just had to call to say how much I appreciated your singing at my mum's funeral. I had lots of lovely comments from people. There were several singers in the audience, and we all agreed that while anyone can sing hymns, it takes a special singer to sing 'Ave Maria' as well as you did."